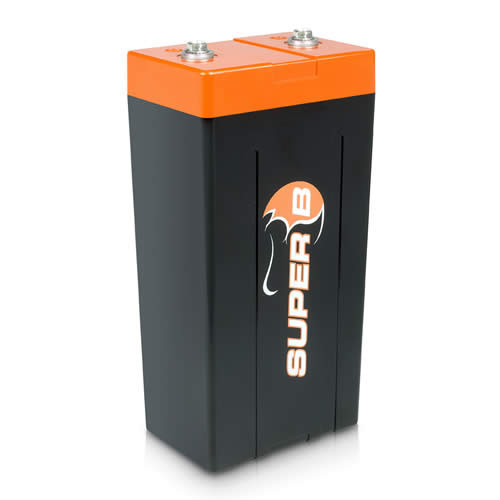 Code : SUPERB20P
The Super B 20P is a lightweight Lithium Ion starter battery, 7.5 lb / 3.4 kg kilogram, specially developed for Racing cars up to 4 Litre using alternator.
£844.00 Inc VAT
The Super B 20P Battery is suitable for:

Racing cars 4 Litre and above using alternator, reserve capacity for endurance and rallying. This newly developed battery is designed to replace the much heavier 70 to 100 Ah lead/acid battery. The super B 20P is based on the safe Lithium Iron Phosphate technology (LiFePO4), better known as Lithium Ion. The super B 20P delivers up to 1200 Cranking Amps.

The super B 20P offers many advantages over conventional 70 to 100 Ah lead/acid batteries:

Super B batteries are based on Lithium Iron Phosphate technology (LiFePO4). This so called Lithium Ion technology as used in the super B batteries is the safest Lithium Ion technology today. On top of that our specially designed casing and electronics further increase safety and durability. Super B 20P refers to 20 Ah (Amps/Hour), which represents the real nominal capacity under maximum continuous load. How different this is from lead / acid batteries where manufactures provide a 20 hour rating. For example the 20 Ah lead / acid batterie can be discharged over a period of 20 hours with a 1 Amp load. This is not very practical, as the same 20 Ah battery discharged with a 4.5 Amp load, for example a 55 Watt light bulb, will yield no more than 4.5 Ah of energy. The lead-acid battery, therefore, has less capacity when the load increases, which means that you can start more often with the super B.

Super B use a 10-second rating instead of CCA for the super B 20P battery. The 10-second rating is easy to understand: it represents the amount of current a battery can produce during 10 seconds without being damaged. The super B 20P can deliver a current of 1200 Amps during 10 seconds. The batteries can deliver higher currents for shorter periods and lower currents for longer periods. The super B 20P battery can be charged with almost all motorbikes, up to a maximum of 14.4 Volts. Do not overcharge, as this will damage the battery. The super B charges much faster than conventional batteries: charging a lead- acid battery takes 7 to 14 hours, during which the internal resistance increases and the charge current decreases. The super B 20P can be charged within 1 hour at a charge current of 25 Amps. If the charge current is increased to 50 Amps, it will charge in 30 minutes. Do not charge the battery with more than 80 Amps as this will damage the battery.

Super B recommend to use the appropriate super B charger to charge super B batteries. Do not use a lead-acid charger, as these chargers are optimized for a different battery technology and make use of methods for charging and safeguarding which are unsuitable for super B batteries. Lifespan Over 5 years. The super B 20P battery is designed with M6 screw terminals, this makes it easy to replace the stock lead-acid battery. The super B 20P battery is shipped with two M6 bolds and plastic end caps to fit to the wires on the bike As super B batteries have a very low self-discharge rate, the batteries will last for several years in storage.