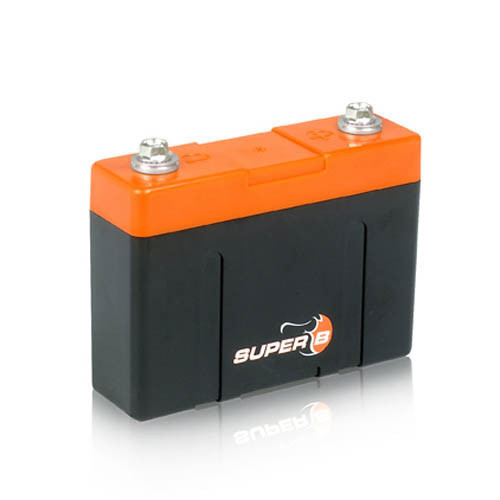 This newly developed battery is designed to replace the much heavier 5 to 7 Ah lead/acid battery. The super B 2600 is based on the safe Lithium Iron Phosphate technology (LiFePO4), better known as Lithium Ion. The super B 2600 delivers up to 150 Cranking Amps, or 50 Amps continuously.

The super B 2600 offers many advantages over conventional 5 to 7 Ah lead/acid batteries:

Super B batteries are based on Lithium Iron Phosphate technology (LiFePO4). This so called Lithium Ion technology as used in the super B batteries is the safest Lithium Ion technology today. On top of that our specially designed casing and electronics further increase safety and durability. Super B 2600 refers to 2.6 Ah (Amps/Hour), which represents the real nominal capacity under maximum continuous load. How different this is from lead / acid batteries where manufactures provide a 20 hour rating. For example the 7 Ah lead / acid batterie can be discharged over a period of 20 hours with a 0.35 Amp load. This is not very practical, as the same 7 Ah battery discharged with a 2,5 Amp load, for example a 25 Watt light bulb, will yield no more than 1.4 Ah of energy. The lead-acid battery, therefore, has less capacity when the load increases, which means that you can start more often with the super B.

We use a 10-second rating instead of CCA for the super B 2600 battery. The 10-second rating is easy to understand: it represents the amount of current a battery can produce during 10 seconds without being damaged. The super B 2600 can deliver a current of 150 Amps during 10 seconds. The batteries can deliver higher currents for shorter periods and lower currents for longer periods. The super B 2600 battery can be charged with almost all motorbikes, up to a maximum of 14.4 Volts. Do not overcharge, as this will damage the battery. The super B charges much faster than conventional batteries: charging a lead- acid battery takes 7 to 14 hours, during which the internal resistance increases and the charge current decreases. The super B 2600 can be charged within 1 hour at a charge current of 2.5 Amps. If the charge current is increased to 5 Amps, it will charge in 30 minutes. Do not charge the battery with more than 10 Amps as this will damage the battery.

We recommend to use the appropriate super B charger to charge super B batteries. Do not use a lead-acid charger, as these chargers are optimized for a different battery technology and make use of methods for charging and safeguarding which are unsuitable for super B batteries. Over 5 years.